Notice: Trying to access array offset on value of type bool in /var/www/wp-content/themes/bifrost/includes/functions/style-functions.php on line 937

Notice: Trying to access array offset on value of type bool in /var/www/wp-content/themes/bifrost/includes/functions/style-functions.php on line 944

The fourth quarter capped off a spectacular year for the Canadian venture space. Though ravaged by an initial sell-off in the early spring, the TSXV ended the year with an annual return of 50% and a 145% increase from its March lows. In comparison, the TSX returned 3% and 55% over the same timeframe. Not only did investors regain composure quickly, they were apparently undeterred by the coronavirus after all– encouraged by a dovish Fed and waves of fiscal stimuli that continued to weaken the dollar, inflating assets. Q4 served to confirm this trend and Canadian markets responded generally positively to key news, namely Biden’s securing of the Presidency and the beginning of global COVID-19 vaccine rollout initiatives.

Alongside equities the commodities index continued its advance through Q4, though weighed down by mid-quarter choppiness in precious metals most acutely felt by gold and silver explorers. Copper had a more favourable quarter gaining 20% in the wake of the clean tech/EV wave with names like Pan Global Resources (PGZ-V) and Kodiak Copper (KDK-V) appreciating in turn. Q4 was also a busy time for our diversified portfolio for marketing e.g. NEXE Innovations (NEXE-V), financing, and advising on companies that we’ve had in our pipeline that are on track to go public like Imperial Helium (Private) and Primetime Cannabis (Private). Please see below for more depth on our mining sector outlook and additional colour on our most active fourth quarter names.

Fig.1: Q220 Mid-Large Cap Intrynsyc Picks, Annual and Quarterly Performance *** This basket of stocks was part of a value play we recommended to clients at the start of the pandemic in April who were looking for miners with strong fundamentals that were being oversold in our view.

As mentioned in the comments above the commodities sector performed well through 2020 (gold ↑ 25%, silver ↑ 46%, copper ↑ 27%) on the back of a weaker US dollar (DXY ↓ 7%) and lower real yields, which were main drivers for the mining sector (see figures 1 and 2). These factors strengthened the incentive for investors to buy commodities, but not to the extent seen historically. Appetite for commodities was offset by a resilient equities market (↑ 16%) and by the rally in bitcoin (↑ 301%). We believe the underlying fundamentals are still very much in place for an even stronger commodities market in 2021. Ongoing proposals for additional monetary and fiscal stimulus packages by governments are expected to drive speculation about the economic outlook and deepening real yield rates. We see these measures driving investors towards safe-haven assets such as gold and silver.

On the base metals side, we predict increasing demand in copper, nickel, and lithium on the back of increasing infrastructure demand, electrification, and the shift towards decarbonization and increasing electric vehicle demand. Copper is well positioned as demand is forecasted to outpace supply from existing mines over the next 20 years, as shown in figure 3 below. Over the last decade there has been a lack of investment in copper exploration which has resulted in copper discoveries declining significantly and furthermore, grades have also been declining over time as existing producing mines enter the latter parts of their mine plans. All this boils down to a near-term need for higher-quality copper projects, which drives the push for more copper exploration spending. 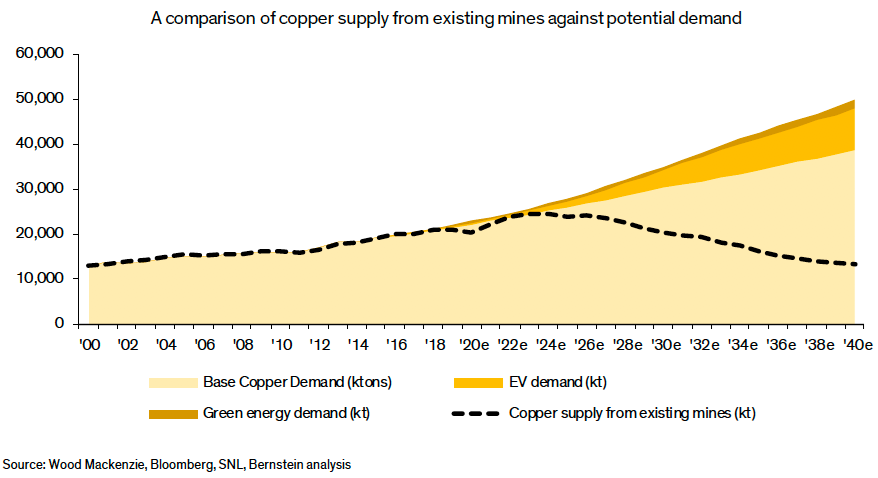 Fig.3: Base Copper Demand Compounded by Green Energy Demand and EV Demand into 2040

A similar scenario is playing out in the battery metals space with a lack of viable projects in the pipeline to meet demand. As with copper, our battery metals thesis is demand-based. Growth in the EV sector underpins the rapid growth in battery technologies and in turn drives an increasing need for companies to explore for and produce these metals in high quality. Though the battery metals market is currently equipped to meet demand through increased production alone, the need for high quality battery grade commodities may prove a defining constraining factor on the supply-demand balance, which may create higher commodity prices. 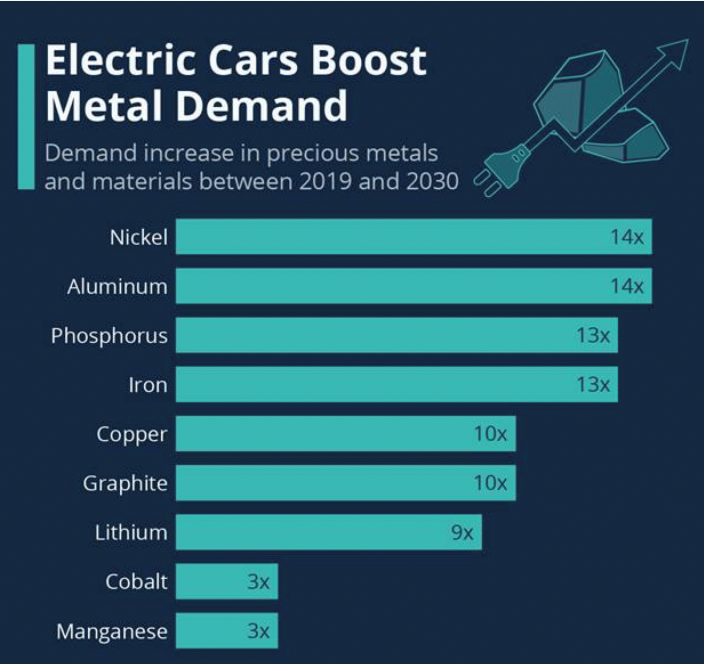 In line with our thesis above, we will be looking to add new projects in our portfolio with an emphasis on the metals discussed to build upon the previous year’s success that we had with Pan Global Resources (PGZ-V), Kodiak Copper (KDK-V), and Blackrock Gold (BRC-V).

Pan Global continued to add value via the drill bit throughout the year, systematically expanding the footprint of their new discovery in 2020. The Company has been highly successful intersecting copper mineralization in every hole drilled to date demonstrating the continuity of mineralization. This success highlights the effectiveness of the targeting methods used by PGZ which will now be directed towards the recently acquired Al Andalus property adjacent to their current La Romana discovery. While we remain enthusiastic about many of the untested targets at La Romana, Al Andalus also offers many targets with similar geophysical and geological characteristics as the current discovery. Drilling is expected to re-commence next week at La Romana and start at Al Andalus by mid-year.

Kodiak is a new copper discovery story having drilled 102 m of 0.68% CuEq early last year. KDK’s 100% owned property is located in South-Central BC approximately 35 km south-east of Merritt, BC and is backed by John Robins’ Discovery Group, co-founded by Chairman Chris Taylor (President and CEO of GBR), and led by Claudia Tornquist (former GM at RIO Tinto and former VP Business development at Sandstorm Gold). To the benefit of the company, they were able to inherit a data rich property with ~26,000 m of drilling that they used to their advantage to determine much of the historical drilling was too shallow. A new geological interpretation suggested better mineralization at depth which is what 2020 drilling has confirmed at the Gate Zone target. What makes this story compelling is that not only has KDK just scratched the surface at the Gate Zone with ~800 m of strike length yet to test, but they also have two other targets with an almost identical signature. Initial studies suggest this is an Alkalic porphyry style (these deposits typically occur in clusters) which further bolsters the significance of the other targets. Kodiak is fully funded for up to 30,000 m this year and the quality of the project has been validated by TECK’s recent investment for 9.9% of the company. These initial results demonstrate KDK could be on the verge of a major Cu-Au discovery and hitting its stride at a perfect time in the cycle.

Blackrock Gold is another company that has been able to consolidate a historically fractional land package to apply a systematic exploration program, resulting in a major discovery. Blackrock has consolidated the largest land package in the historic Tonopah Silver District in Nevada consisting of numerous historical high-grade veins. This district produced 174Moz of Ag and 1.8Moz of Au between 1900 and 1961 until low gold prices and technical issues forced the closure of the mines in the region. BRC’s drill program has confirmed that the mines were not exhausted, and that mineralization continues along strike and down dip of the historic workings. BRC’s discovery hole yielded 29 m of 965 gpt AgEq and subsequent drilling, though less robust, has intersected similar high-grade values but over narrower widths– which is common in these types of systems as they pinch and swell. Blackrock has also had success at their DPB (Denver-Paymaster-Bermuda) vein target area which will be their focus in 2021. The Company is currently preparing a 20,000-30,000 m core drilling program aimed at tabling a maiden resource (Q421) on the DPB target area which has a footprint of 1 km by 600 m and highlighted by grades of up to 1,190 gpt AgEq over 3 m. We look to Blackrock Gold to add value via the drill bit and highly anticipate the maiden resource at DPB in the coming year.

We have been advisors to this company since its inception in late 2019. After locking up a significant asset in Q3, we have been focused on finalizing funding for its go-public financing planned for Q221. At the time of writing, the company has announced an upsized $13.5M go-public led by Eight Capital and Haywood. The company seeks to leverage its proprietary database of helium producing gas wells in Alberta and BC to most efficiently identify and acquire target wells, to eventually become a supplier into a tightening helium market. We think the company’s timing couldn’t be better and are looking forward to seeing what the market thinks upon its listing in Q221.

The US cannabis market is on the precipice of a paradigm shift with a Democrat controlled White House, Congress and Senate. Primetime Cannabis is a California based company focused on key parts of the cannabis supply chain – specifically distribution and finished goods manufacturing – where they have significant scale and a competitive advantage. We have known management for years and have a huge amount of confidence in both their knowledge and know-how of the California market and their ability to execute. The company is on track to do north of USD $150m in revenue and $40m in EBIDTA this year and we are advising on the companies current financing and public listing aimed for Q221.

We have known NEXE for quite a few years and last visited their facilities in September where management showed us how they manufacture their 100% compostable plant-based K-cup. Over Q4 NEXE closed its financing for $14.2M and listed on the TSXV under the symbol ‘NEXE’ and has been received well by the market, gaining ~500% since listing. We will continue to market this name as the company seeks to further streamline its manufacturing process and realizes more concepts from its IP pipeline. You can read our thoughts on NEXE here.

We were pleased to conclude a memorable year on a strong note. Despite market uncertainty, key drivers in the life sciences, (clean) technology and mining industries make a favourable case for a continual bull market. As speculative demand for deals ramp up so does the importance of discerning wheat from chaff. To this end we continue to apply our fundamental approach and leverage our industry relationships to source high quality deals for our clients in pursuit of disproportional returns. We are looking forward to another busy, interesting quarter.

Kodiak Copper Corp (KDK-V): Just The Tip of The Iceberg